On Rani Lakshmibai’s birth anniversary, here’s a look at some interesting facts about Rani of Jhansi

Rani Lakshmibai, also known as ‘Jhansi ki Rani’, is an icon of women’s empowerment and one of the greatest freedom fighters India has ever seen. The Queen of Jhansi is known to have changed the course of history through her courage, honour, and patriotism.

“Khoob Ladi Mardani Woh Toh Jhansi Wali Rani Thi” – This epic line from the poem written by Subhadra Kumari Chauhan sums up how the Rani of Jhansi fought courageously against the British Empire and left a path-breaking-influence on Indian history.

Popularly known as India’s “Joan of Arc”, Rani Lakshmibai was renowned as one of the greatest personalities of the Indian Rebellion of 1857 and became a symbol of resistance to the British Raj for Indian nationalists.

Today, on the occasion of her birth anniversary, we have compiled some lesser-known facts about Rani Lakshmibai that you may not know.

It is believed that Rani Lakshmibai was born on November 19, 1828, in Varanasi, however, there is still a lot of debate about her actual birth date.

Rani Lakshmibai’s maiden name was Manikarnika Tambe. She was fondly called ‘Manu’. Her father, Moropant Tambe, worked in the court of Baji Rao II, the Peshwa of Bithoor.

Rani Lakshibai was home-schooled and her education included shooting, fencing, and horsemanship.

Manikarnika married Jhansi’s king, Gangadhar Rao Newalkar, at the early age of 7 in May 1842. The marriage was consummated after Lakshmi turned 14, in 1849. After her marriage, she was given the name Lakshmi, after the Indian goddess.

In 1851, Lakshmibai gave birth to a boy who was named Damodar Rao. The child, unfortunately, passed away when he was just four months old.

Lord Dalhousie, the then British Governor-General of India, did not recognise her adopted son as the heir of Jhansi and enforced the ‘Doctrine of Lapse’ to annex the kingdom. Rani Laxmi Bai revolted against this and cried out “Main Meri Jhansi Nahi Dungi” (I will not surrender my Jhansi).

READ | International Men’s Day 2022: Know why this day is celebrated on November 19

After the death of her husband and the increasing threats by the British Empire, Rani of Jhansi ended up raising an army to fight the mighty British forces when they laid siege to her kingdom. Just a few weeks later, Laxmi Bai led her army into an unequal battle against the British, losing her life when she was barely 30.

The Queen of Jhansi, was badly wounded during the battle. However, she did not wish for the British to capture her body, so she told a hermit to burn it. After her death, a few locals cremated her body. Her tomb is in the Phool Bagh area in Gwalior.

Though she fought them, the Britishers only had admirable things to say about the Rani of Jhansi. About her, Sir Hugh Rose had written, “She was the bravest and best military leader of the rebels. A man among mutineers.

Meanwhile, Lord Cumberland said, “The Rani is remarkable for her bravery, cleverness, and perseverance; her generosity to her subordinates was unbounded. These qualities, combined with her rank, rendered her the most dangerous of all the rebel leaders.” 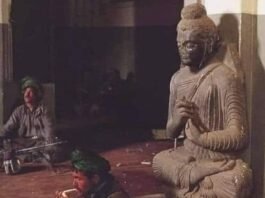